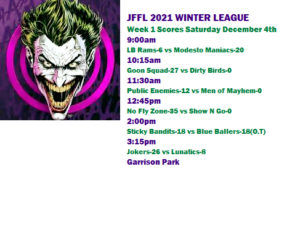 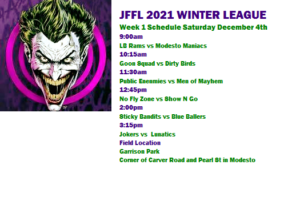 League opens to it’s 27th year going back to Fall/Winter of 1994. Jokers have played in every season. No Fly Zone, Goon Squad, Modesto Maniacs, Public Enemies and Jokers all open the league with wins, whereas Sticky Bandits,Blue Ballers will need more time to decide their match-up as they finished with 18 apiece in an O.T.

Both teams had a rough start in week 1, should be a much closer match-up for both teams here. Show N Go had some rust after not playing for a couple yrs. Dirty Birds are new to the JFFL.

Modesto Maniacs had their biggest opening week win in all their seasons 20-6. Public Enemies (formerly Eagle Fang Mafia) had an impressive shutout win to open the season 12-0.This is a rematch from the Fall’s Division C Bowl in which Modesto Maniacs came away with the narrow 7-6 win. Prior to that they met twice in Summer where they split wins, so both are familiar with each other.

Both teams opened with impressive wins winning by a combined 62-0.These two met last in Spring where they split their 2 games with Goon Squad winning 6-0 in week 3 and No Fly Zone taking the Bowl Game 13-7.

No history here since Men of Mayhem are new to the JFFL.

Blue Ballers returns after a hiatus since last Spring. The veteran Jokers opened with a 26-8 win in their 27th year in this league.

No point spreads in week 1 but the unexpected 62-0 combined wins by No Fly Zone & Goon Squad would be the closest to a surprise.

Sticky Bandits and Blue Ballers battling to the first O.T. tie in quite a few years. Both teams scored in O.T. to preserve a tie and prevent a loss. In regular season, if neither team scores in O.T. then team to gain most yards in the O.T. is the winner.