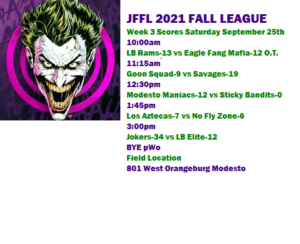 Week 3 saw a lot more competitive games than week 2, more entertaining to watch closer games. LB Rams won in O.T. and Los Aztecas,No Fly Zone played to the whistle, see Upset Of the Week and Crazy Game below. PWO remained at the top of the Power Rankings with a bye but it was shuffled up a bit 3 thru 5 due to the upsets.

-Savages and Los Aztecas moved into Division A with their wins and JFFL will let the teams fight it out to determine who will be A or B teams for the Bowl Games in week 6.

-Modesto Maniacs was able to pitch their first shutout since their 14-0 win in Div. C Bowl Championship over the Blue Ballers in Spring league.

-In an interesting twist for week 4, Goon Squad and Eagle Fang Mafia both have played LB Rams during Fall to an O.T. game and now will play each other this week to start the day’s games.

-LB Rams and No Fly Zone have played some tight games into O.T. in the past and will match-up for week 4, LB Rams could potentially shake up the Power Rankings this week as could the Savages/Los Aztecas game.

These two have met once before, during Summer league, with Goon Squad coming out with the 13-6 win. Goon Squad is looking to regain the form that resulted in an OT win in week 1. Eagle Fang Mafia lost in OT last week but nothing to hang their head for as they gave one of the top JFFL Fall teams everything they could handle. Eagle Fang Mafia is leading Division C in scoring.

These two last played in Winter League when they played back to back in week 5 and a week 6 Bowl Game. In week 5 they played to the first tie in over 5 years 6-6. So they did it again the next week in the first JFFL O.T. Bowl and was just about another O.T, if No Fly Zone didn’t stop the XP at end of game.

Savages played Los Aztecas when they were Lunatics in their very first JFFL game in Summer and came away with a 12-0 win. Both teams won last week against difficult opponents.

Modesto Maniacs is next up for first year team LB Elite. Modesto Maniacs won 12-0 in week 2, LB Elite has improved every week and look to continue that trajectory after putting up 12 points on a good Jokers D last week.

Sticky Bandits has never played Jokers, after a week 1 win Sticky Bandits has had a rougher go at it the last 2 weeks and will look to continue their improvement by avoiding weaknesses and playing to their strengths.

-Savages+7 won 19-9 over Goon Squad after a couple of disappointing losses to start the season. Savages were down early due to a Goon Squad safety, before taking the lead and never trailing again.

-Los Aztecas+1 won 7-6 over #2 Power Ranked No Fly Zone. Obviously, a tight game from start to finish and not decided until the final whistle.

LB Rams just can’t help but play in O.T. games, their 2nd in 3 games and a few in the past. Eagle Fang Mafia came in as 10 point underdogs and very nearly pulled off the Upset Of the Week, but just came up short in the O.T. on yards, so LB Rams was awarded 1 point for more O.T. yards gained. In O.T. both teams have 4 plays from the 20yard line to either score or gain the most yards if no score.