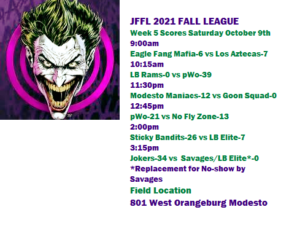 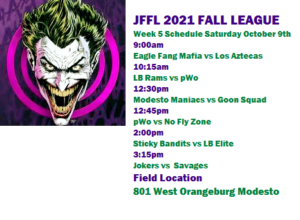 JFFL Fall regular season ends with PWO in a familiar position, being crowned as the Division A Champions, last achieved back in the Winter campaign. Another in a long line of accomplishments by this long time veteran team.

-Other winners to end the regular season were Modesto Maniacs removing the Goon Squad albatross from around them with a victory (see Upset Of the Week) and to end regular season with 3 straight wins.

-Sticky Bandits and LB Elite played with as many picked up players as their own players, they’ll play again this week with hopefully all organic players. SB is much improved over their first campaign and LB Elite has improved every week in their first JFFL season.

-After each Bowl Game, winning teams go over to the JFFL table to be presented the Bowl Trophy and MVP trophy as well as having team photo to be posted on the JFFL website(keep the jerseys on for the team photo).

-For those of you that attended high school in this region, the undefeated teams going into this week were Manteca(7-0),Davis(7-0) and Waterford(7-0). Davis and Waterford are having their best season in 10 yrs.There are 5 teams with just 1 loss: Downey(6-1), Edison-Stockton(6-1), Central Catholic(6-1), Escalon(6-1) and Kimball-Tracy(5-1)

Sam Dickerson played QB with Jokers 1988-2012 when he retired at 61. Sam played WR in 2 Rose Bowls with USC and OJ Simpson as a team mate, played in the NFL and the WFL (stood for the short lived World Football League), also in the Stockton Sports HOF. Goon Squad and LB Rams played into O.T the last time they met, Goon Squad came away with the 7-6 win with more yards in OT.

Eagle Fang Mafia’s losses were all by 1 point, 4 of their 5 games have been decided 1 point., can’t play any closer than that.Modesto Maniacs lost in first game and have reeled off 3 wins in a row since. These 2 met in a Summer Bowl game with Modesto Maniacs coming away with the close 13-8 win.

Arno Watt was a great OL for Jokers from 1983-2003, in Jokers HOF.He was the original Joker Big Man and looked like Grizzly Adams(for those that ever saw the TV series). But he was a gentle man off the field and would stand up for the weak. Sticky Bandits and LB Elite played in week 5, but both teams were short players and had to pickup many players to field a full lineup, they’ll go again, but this time it’ll be for a Bowl Game.

Los Aztecas came away with the 7-6 win earlier in season in their first ever meeting. No Fly Zone was missing some players that day, will see if that was the difference or not.

These two long time franchises have met many times over the years.Last game back in Spring went the Jokers way. PWO closed out the regular season with a perfect 5-0 record to be crowned as the Division A Champions, they last were Division A champions back in Winter League.After opening week loss, Jokers won out regular season.

-Modesto Maniacs+2 finally got on the board in their series with Goon Squad with a 12-0 win. All 4 of their games over that period of time were shutouts by one or the other.

Los Aztecas kept moving the ball to get in scoring positions a few times but the Eagle Fang Mafia defense came away with a couple of timely take a way’s in their own end zone. In the end the difference was Los Aztecas converting on an XP to get the margin of victory.